Gorilla Trekking in Uganda: The Adventure

Gorilla Trekking in Uganda “The adventure of lifetime”. Several months ago a friend mentioned that he wanted to go gorilla trekking in Uganda – to see the famous mountain gorillas . If I remember correctly it was one of those conversations that we tend to have in Juba after a particularly grueling day of beating ones head against a wall. He could’ve asked me if I wanted to bungee jump off a sidewalk and I would’ve signed up.

So there we were just this last weekend, 4 of us from Juba wheels down at Entebbe International Airport in Uganda, ready for a guy’s weekend with our large, hairy friends.

Mike met us at the airport. “Born and bred” in Uganda, Mike was to be our driver, guide, comedian, and all around good sport for the next 3 days. He put up with our bad jokes, incessant American chatter, diverse musical choices and post-trekking stench like a champ.

After settling our outstanding debts and loading the Land Cruiser with water, we set off in an air of excitement and anticipation, heading southwest towards Bwindi Impenetrable Forest, home to some of the only ~880 mountain gorillas left in the wild. That was around 2:30pm.

By 5pm we were starting to calm down a bit. iPod earphones were thoroughly implanted in several ears and a failed attempt to get a cold beverage at a ‘gas station’ had left us starting to wonder when we’d get there.

“Oh, it will be another 6 hours at least,” consoled Mike with perhaps a hint of a chuckle.

6pm – arrival at the equator. A few quick pictures. A few cold beers. Off again in a flash. 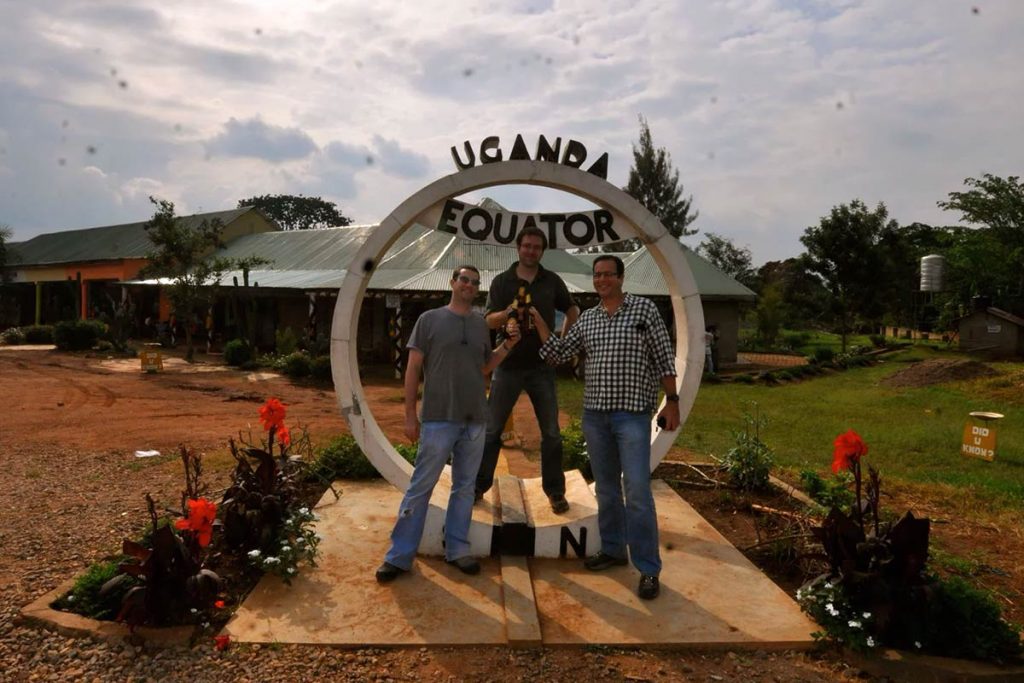 Greg, Me & David at the equator. This time with beer in hand.

11:45pm – (except for Chris who valiantly kept Mike awake)

12:30am – we finally arrive at Bwindi Lodge and have some more food… none of us really remember much about those few minutes. Although we do seem to recall that the food was pretty good.

So, after some much needed few hours of sleep, we were up at dawn (woken up in our fancy tent with coffee and muffins) and ready to see some gorillas! Our fearless trip organizer’s parents had wisely recommended that we plan for two days of gorilla trekking. The likelihood of finding the gorillas is indeed quite high (we were told that there hadn’t been a refund in over 5 years), but with a second day to come we weren’t too disappointed when we found out that our day 1 visit would be to a family of only 6 adults (my goal of cuddling with a baby gorilla would have to wait at least another day).

In what can only be described as breathtaking (both in terms of the scenery and what it did to me physically), our hike lasted a little over 2 hours. Advance trekkers leave early in the morning to try and find the habituated gorilla families based on their previous day’s location and mad gorilla trekking skills. No GPS ankle bracelets here people, this is done old school using tracks, poop, and who-knows-what else. There are many other wild mountain gorillas that are not used to human contact not to mention highly aggressive mountain elephants… these tend to be avoided and were the official reason why we had two guys with AK47s with us the whole time. Apparently it takes quite some time to habituate a gorilla ‘family’ to us homo sapiens, essentially giving them time to know that we’re just silly tourists and not poachers wanting to cause them harm.

I don’t think I will ever forget first seeing one of these big boys in the wild during my gorilla trekking in Uganda. A bit shy with massive bellies and deep red eyes, they were magnificent, each unique in his or her own way. It’s hard to describe what it feels like to have such an amazing creature look you right in the eyes. In this instance, a picture can indeed speak much louder than words. 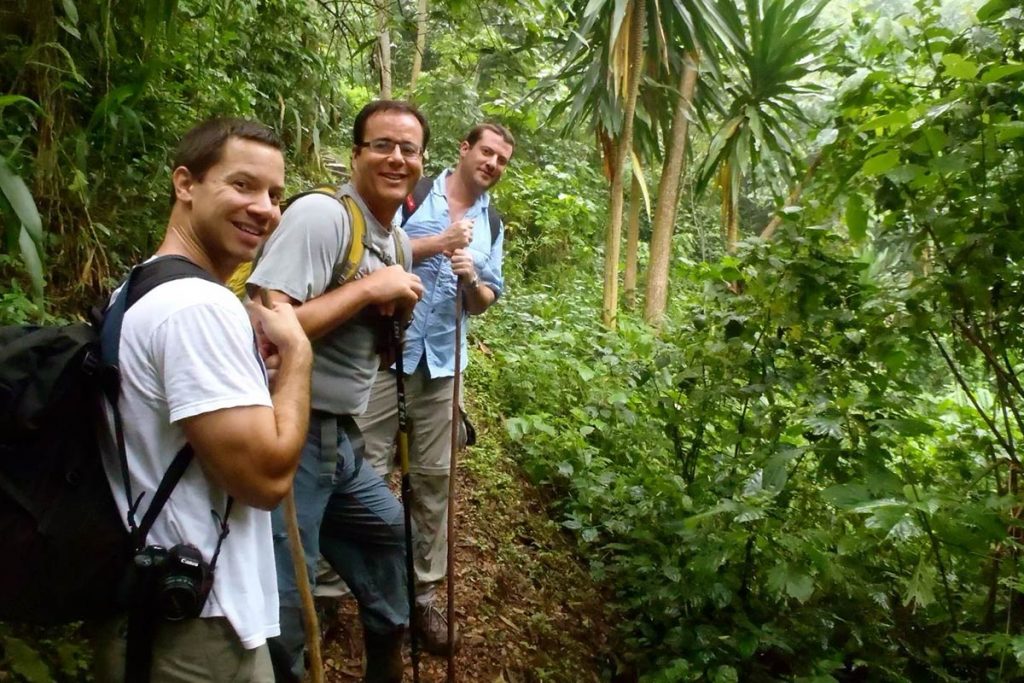 Didn’t take long for the jackets to come off… despite being at altitude (~1,800m) we were in the rain forest and it was a bit warm, especially carrying bags full of water, lunch and (in my case) camera equipment

Did you know that gorillas are 98.4% biologically identical to humans? Kinda makes you wonder about that evolution vs. creationism thing a bit…

Day 2 of project ‘let’s see some primates’ commenced at a chilly 4:30am with yet another pot of coffee and muffins. I must say, the Bwindi lodge was quite nice and Fred, the manager, took care of us well. The food was excellent, beds comfortable, showers hot, and view stunning. The rooms (well, they’re tents actually) reminded me of something straight from Out of Africa, although instead of Meryl Streep to snuggle with I was stuck with Greg…

By 5:30am we had bid our adieu to our luxury in the jungle and were on our way to a different side of the park. After waiting a few minutes for our fellow trackers (this time a friendly group of four British women), we received a similar briefing from the ranger guide fellow, advising us not to get within 7 meters of the animals, etc. (By no fault of our own, we certainly did not follow the 7 meter rule… what can you do when you step past a bush and there’s a gorilla right next to you?!?!)

The hike on day 2 was, in my humble opinion, a bit more strenuous than the previous day. More machete hacking, more mud, and more thorny bushes. Maybe this is a good time to mention that gorilla trekking in Uganda is a real experience not to forget, while an undeniably amazing experience, is best suited for those that are in decent (preferably good) shape. That having been said, Greg’s parents (60+ years young) did a similar trek in February and passed with flying colors. For the less mobile, apparently there is a ‘991 Program’ (I kept wondering if they meant to be saying 911 as a joke but no, it’s 991 for some reason) whereby you can be carried by 4-8 people (depending on how many big macs you’ve eaten in the past 6 months) in a stretcher to see the gorillas… no thanks. 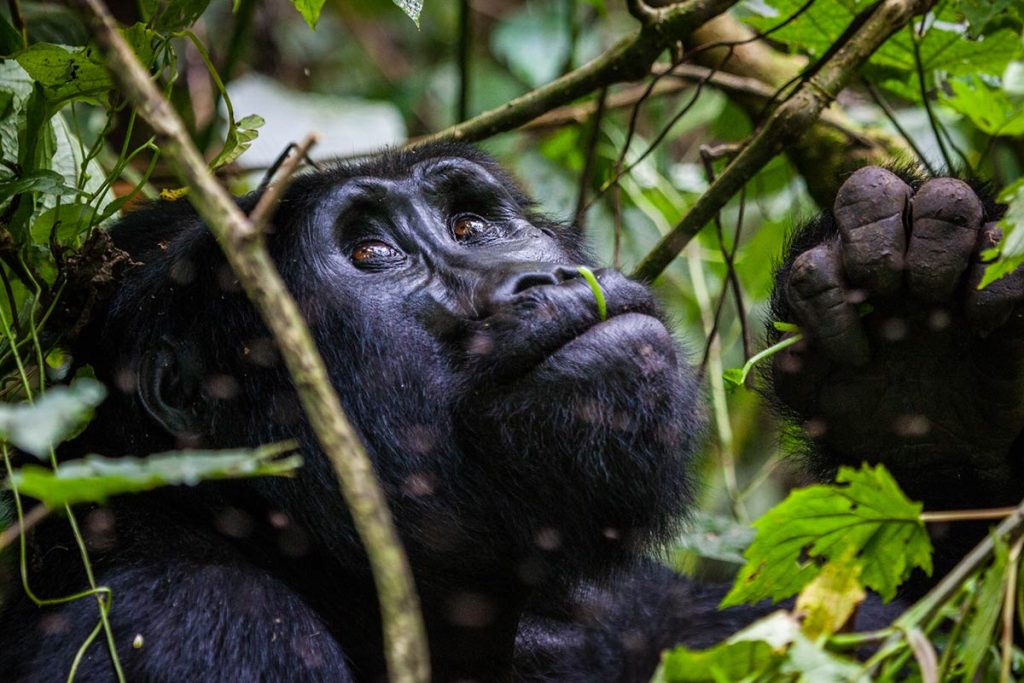 On the flip side, if you are a serious or semi-serious hiker (David brought his own hiking poles…), this is your Mecca. Next year, instead of going back to Yosemite, go to Bwindi.

Needless to say, I was hurting at points. I’d like to blame it on the water and camera equipment in my backpack, but it really comes down to me just being out of shape. But, like any guy with his man card on the line, I kept on trudging. And man was I happy I did!

If day 1 was awesome, day 2 was absolutely unbelievable. We first stumbled upon two silverbacks napping right next to each other. ‘Silverback’ describes the color of the hairon the back of most full grown males. This particular family had multiple grown males with the salt and pepper thing going on, but as is the case in all gorilla ‘families’, there was only one dominant male silverback in charge of protecting the group. 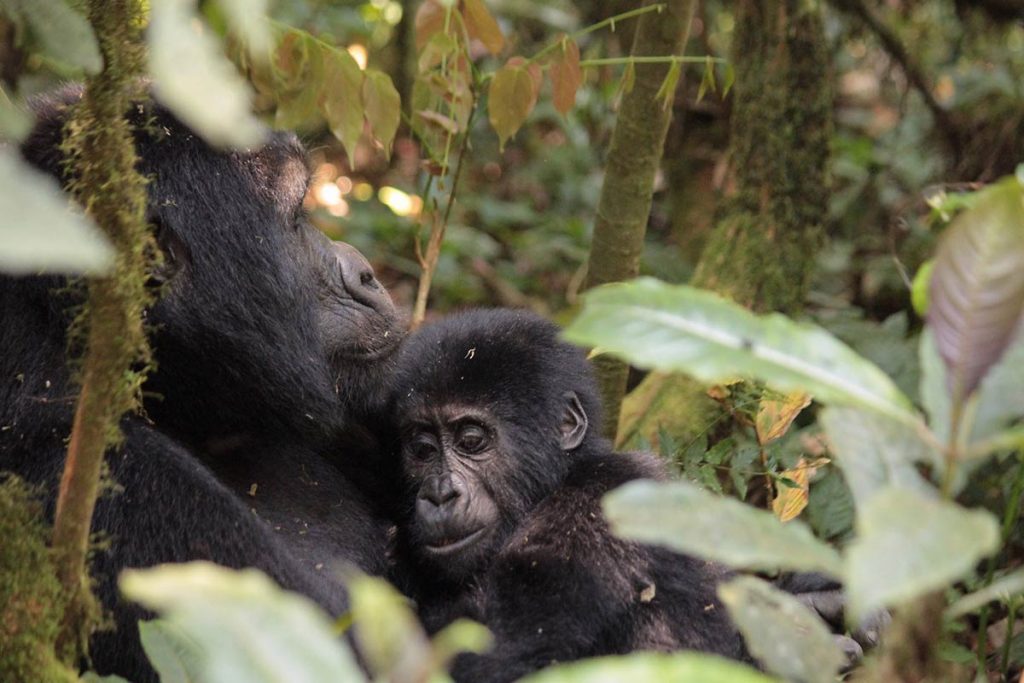 Next we got the rare chance to see a mother with two young children (is children the right word here…? cub? pup? toddler? no idea…); the mama even decided to carry the 9-month-old on her back at one point!

At several points during the two days I felt as if I was delicately dancing with delirium (not to mention more than a little soreness), but each time all I had to do was look around me to gain more energy. Having lived primarily in cities for my entire life, it was difficult for me to fathom the remoteness of Bwindi Impenetrable even while hiking right in the middle of it. The air was filled with sounds of grasshoppers (yes, we ate some during the trip – they kinda tasted like beer nuts), exotic birds, gorillas growling in greeting to the muzungus (foreigners), and periodic utter stillness.

On the way back to the vehicle with sweat running down my face, legs laboring to keep moving, blisters forming, clothes ripped, I couldn’t help but have one thought:

I love my life.