Mount Nyiragongo which is a part of Volcanoes National Park in Eastern Democratic Republic of Congo erupted on Saturday 22nd May 2021 at around 7pm (17:00 GMT). This follows its last eruption in 2002 that killed over 250 people and 120,000 were left homeless. Mount Nyiragongo is one of the most active volcanic mountains in the world located in Virunga national park in the Democratic Republic of Congo.

Nyiragongo is a stratovolcano with a large lava lake at its summit that is very active located close to the Congo-Rwanda border. The eruption has left many people homeless especially those in Goma town located at the foothills of Mount Nyiragongo. During the eruption the sick and elderly people were left to face their fate as people run away from their homes. 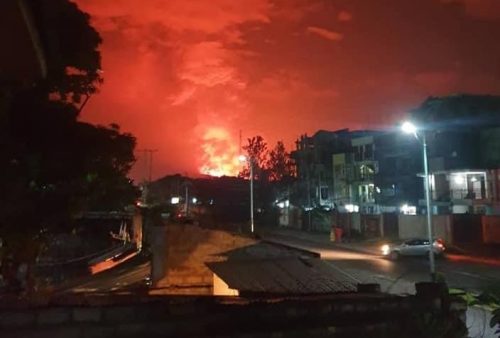 The sky was lit in a red color from the volcano on the day of eruption which sent people into panic having to flee from their homes. Lava flowed down the mountain towards Goma city and its said that by Sunday morning the lava had slowed down stopping close to Goma city suburbs. It was witnessed that lava engulfed one highway that connects Goma town with the city of Beni which is located north of Kivu province.

Lava flowed south towards the city and is said to have reached the airport on the edge of the town reported by volcanologist Dario Tedesco who is based in Goma town. Therefore new features were seen opening in the volcano letting lava flow southwards to the city after it initially flowed east towards Rwanda which Tedesco said Goma is the target.

Many people were seen carrying their belongings fleeing from their homes towards the Rwanda border and west of Goma city. Over 1000 homes were destroyed and at least 30 deaths registered. The flowing lava cut off a highway to Beni city from Goma and electricity was off in most of the areas around mount Nyiragongo.

Goma city houses about 2 million people and thousands of these people have been evacuated from their homes to avoid risks of other eruptions. Over 600 homes and 5 schools were destroyed in the 17 villages affected by the eruption. By 23rd may 2021 the lava flow had ceased and people were returning to their homes. Strong aftershocks have been experienced in the city of Goma and strong earthquakes struck on May 25th destroying many buildings. There is a strong fear that there could be another eruption due to the magma that has been detected underneath Goma city and Lake Kivu that neighbors mount Nyiragongo. 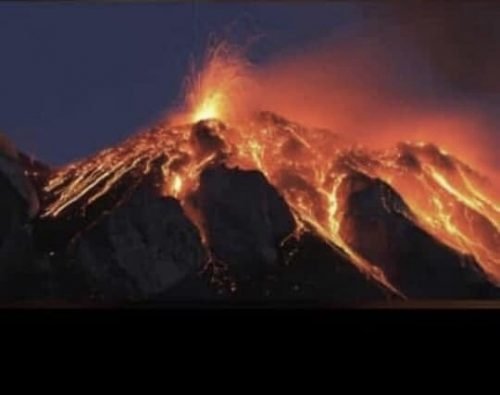 More than 200 tremors have been recorded and multiple cracks on the ground have been observed with the Kivu Crater Lake refilling so fast. All these warning signs show a possibility of another eruption soon.

Reports by researchers have shown the increased seismic activity at Nyiragongo especially that on 10th May 2021. The residents say there was no prior warning by the government and researchers before the skies turned red and lava started flowing down.

The people panicked to leave their homes and many families have been separated during the fleeing. Mount Nyiragongo has not been properly monitored because of lack of funding since the World Bank cut its funding to Goma Volcano Observatory due to allegations of corruption. The displaced people are now seeking for help from their government and humanitarian groups in the world to have them resettled and united with their families.

Your May wonder if Congo is safe for tours and Travel. Due to all these ongoing Challenges, DR Congo is especially Vurunga national park and Nyiragongo Volcano climbing is currently on hold. Agencies are monitoring situation till the area stabilizes and Information will be posted as soon as tourism resume again.

Why Is Uganda Called The Pearl of Africa?

How Much Does A Safari In Africa Cost?