Uganda holidays ; Straddling the Equator at the heart of the continent and sandwiched between Kenya, Rwanda, Congo, Sudan and Tanzania, Uganda is a small country by comparison with its African neighbors. Much of the country sits at about 1,000 m above sea level. Described by Winston Churchill as the ‘Pearl of Africa’, Uganda’s most alluring features are its beautiful forests, wildlife, lakes and mountains, and in recent years it has become very well known for its exceptional gorilla safari. A Uganda Holiday safari also features the Africa big five safari in compliment to the gorilla trekking safari like the 3 day Murchison Big 5 Safari.

Uganda’s wildlife has increased steadily in recent years and a variety of game can be seen here, but its parks do not compete with the likes of Tanzania’s Serengeti, Botswana’s Okavango Delta or Zambia’s South Luangwa. There is an argument that this is not Uganda’s ambition anyway – and one certain advantage of safari here is that the game viewing is free of mass tourism! However Uganda is not a big game destination; primates, especially the mountain gorilla and chimpanzees, are a very special attraction in their own right and these are the reason that we feature Uganda.

Uganda holidays will bring you to one of the game viewing area, the  Queen Elizabeth National Park (QENP), with the ice-covered peaks of the Rwenzori Mountains as a backdrop. The park is rich in wildlife, including the tree lions at Ishasha, and is a haven for bird-watchers. Chimpanzees can be seen in the steeply-forested sides of the Kyambura Gorge near QENP, and in the Kibale Forest. Further south, in the chain of eight blue Virunga volcanoes strung out on the borders of Uganda, Rwanda and Congo, lives the mountain gorilla. The combination of volcanoes, volcanic lakes and steeply terraced hillsides make this a dramatic area – unquestionably one of Africa’s most beautiful regions. The remaining mountain gorillas live further north in the Bwindi forest in Uganda. The mountain gorilla viewing in any of these areas is exceptional. 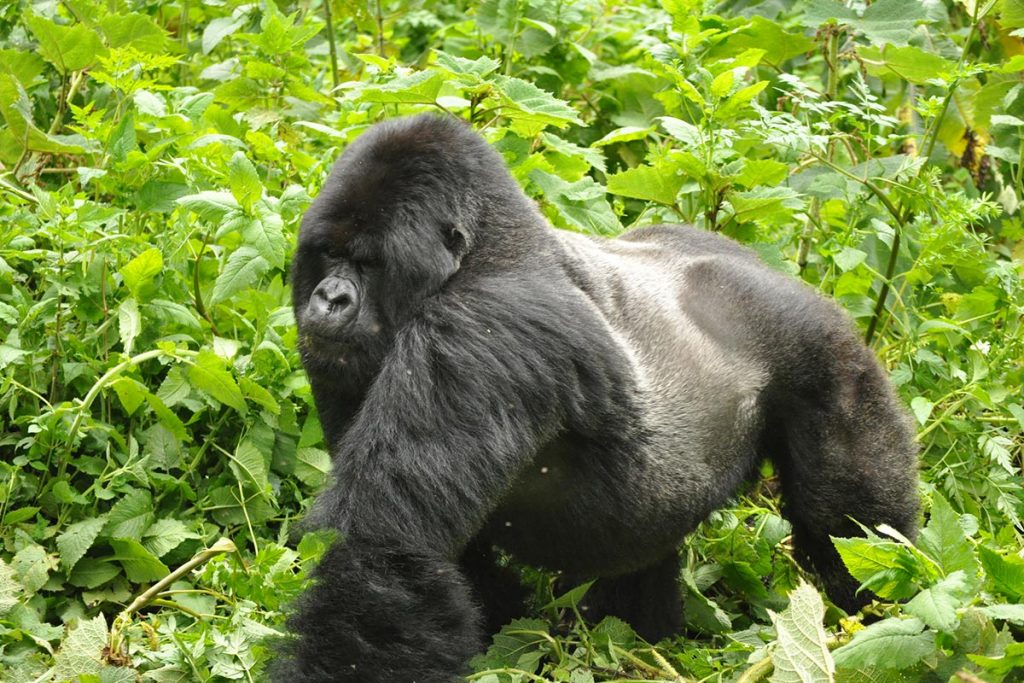 Much like most of Africa, Uganda was inhabited very early, with Bantu people farming the land from 1000 BCE.  Europeans arrived in the 19th Century, however unlike its neighbours Uganda was not fully colonized but became a British protectorate. Due to this partial independence, many characteristics of pre-colonial Uganda still survive.

Uganda was a key player in the slave trade, and since the abolition of slavery has turned its attentions to its natural resources, with coffee as its main export. Idi Amin’s reign (1971-1979) and the subsequent civil war devastated the country, the rehabilitation for which can still be felt today.

In geographical terms, Uganda predominantly comprises a plateau, with most of the country sitting at around 1000m. Nearly a fifth of Uganda is covered by water, with the largest volume of water to be found at Lake Victoria (Africa’s largest freshwater lake) in the south-east, and the rest in the 4 huge lakes and 8 major rivers.

The mountainous region where the gorillas live sits in the south-western tip of the country, on the border with Rwanda and the Congo. Chimp trekking is possible in the forests along much of the south-west / western side of the country.  Show me less

Uganda holidays: when to visit

The best time to visit Uganda is during the dry season, when the gorillas are easier to spot and the trekking is easier because the forest is less dense and the ground is hard. Not to mention we prefer it when the sun shines …

However, during the rains the gorillas often move down to the lower slopes for warmth and because there is an abundance of food.  Thus during the rainy season you are likely to spot the gorillas sooner without so much of a trek – you could be back at your lodge for a late lunch. 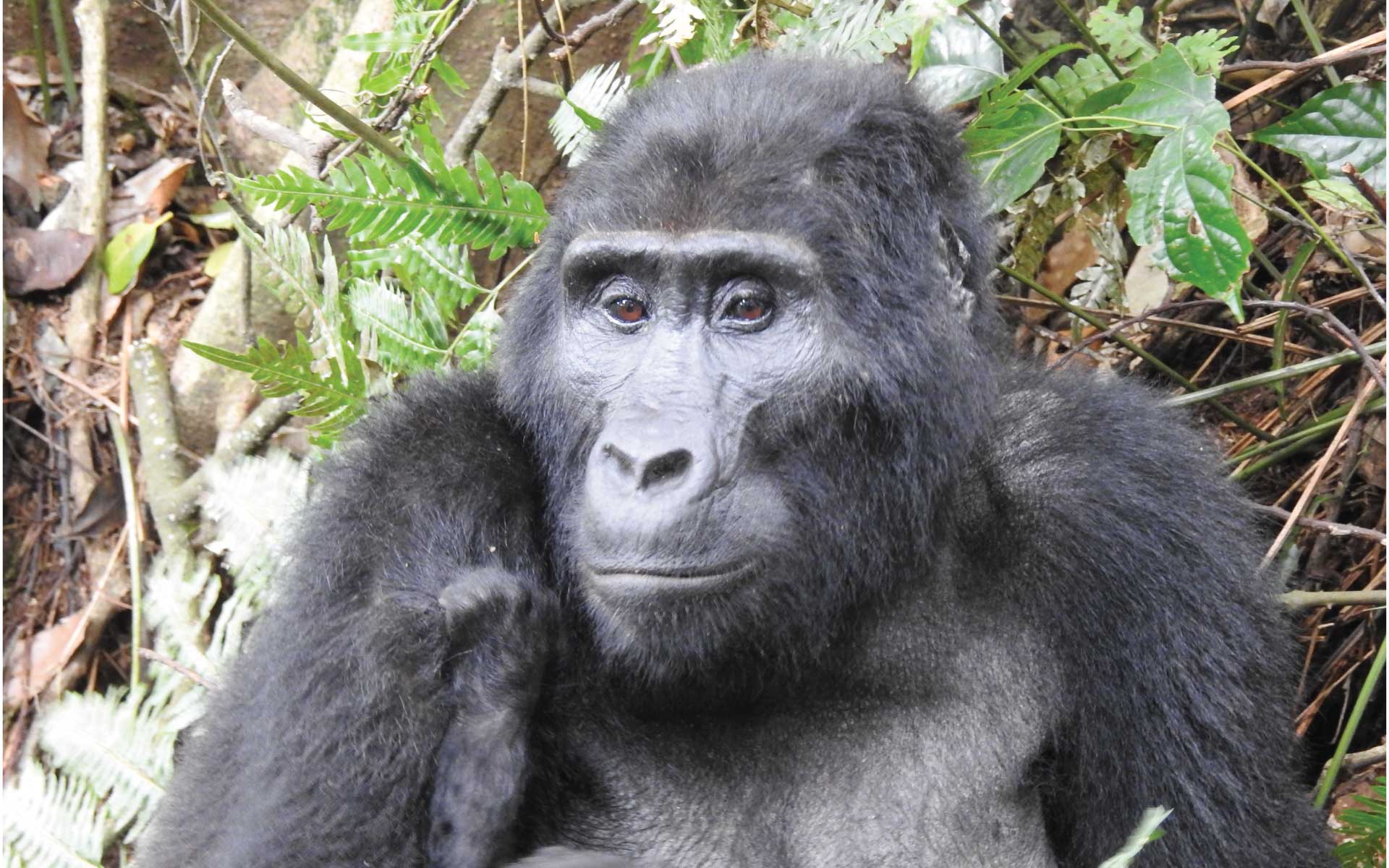 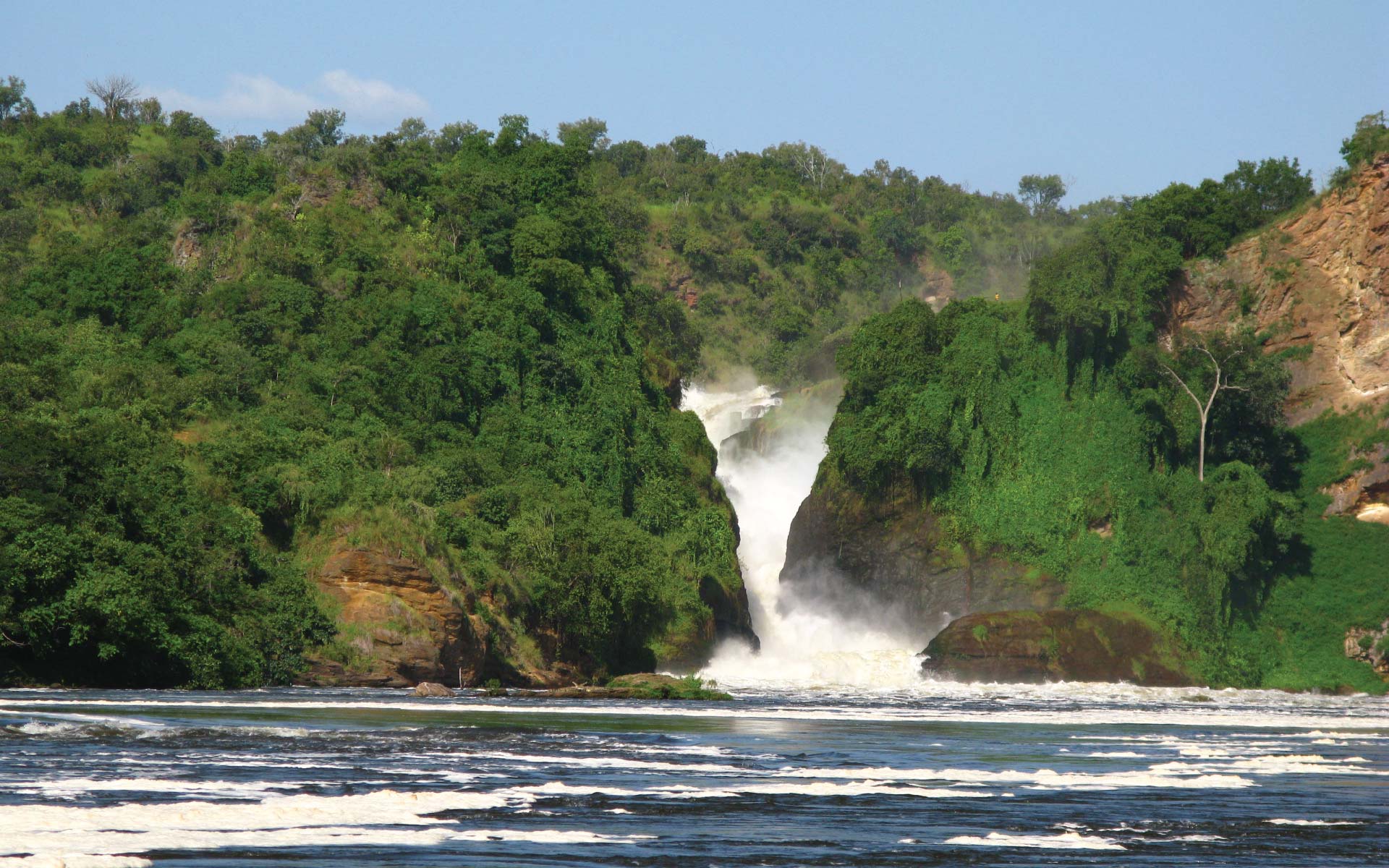 2 days | By Road from Kigali 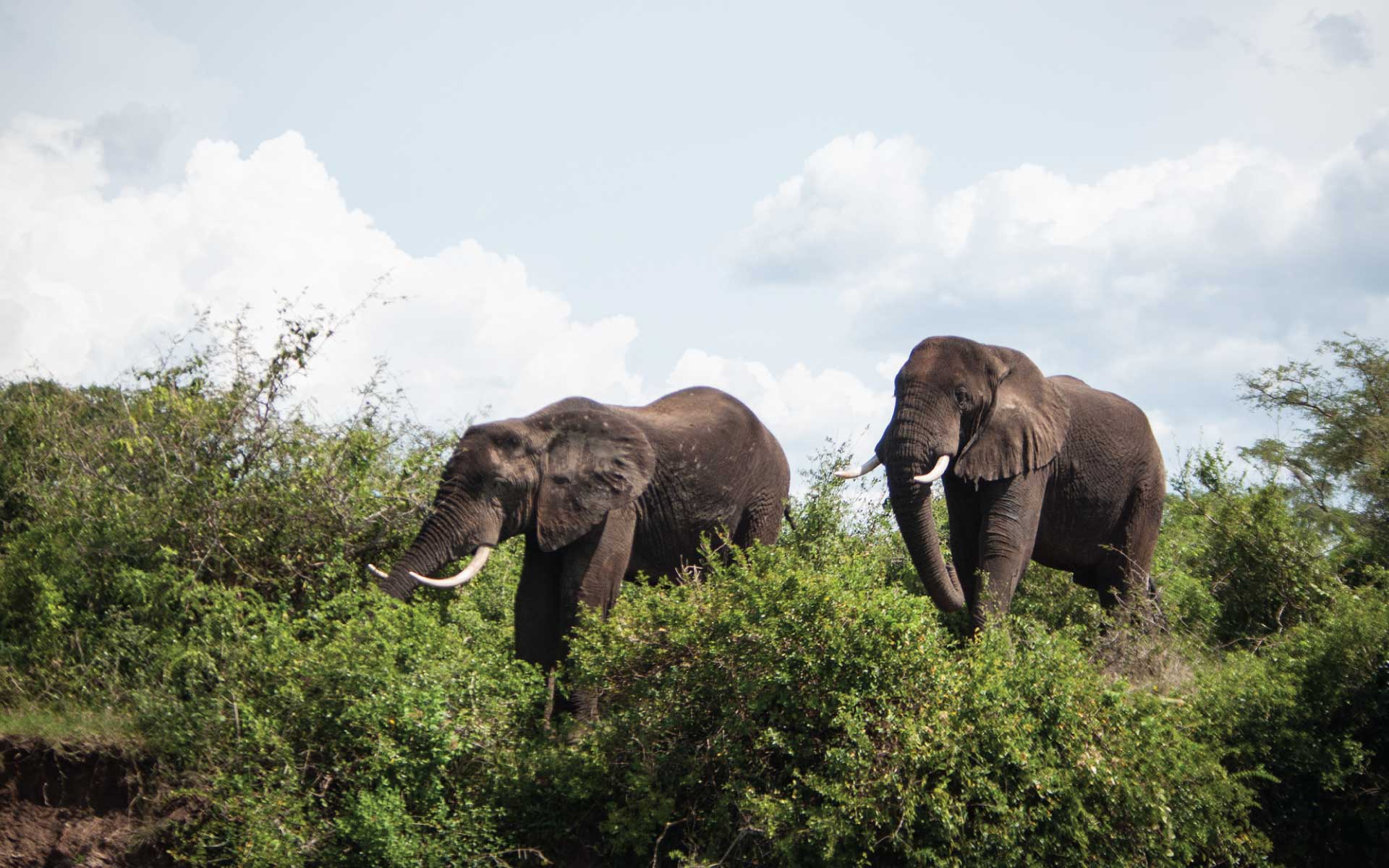 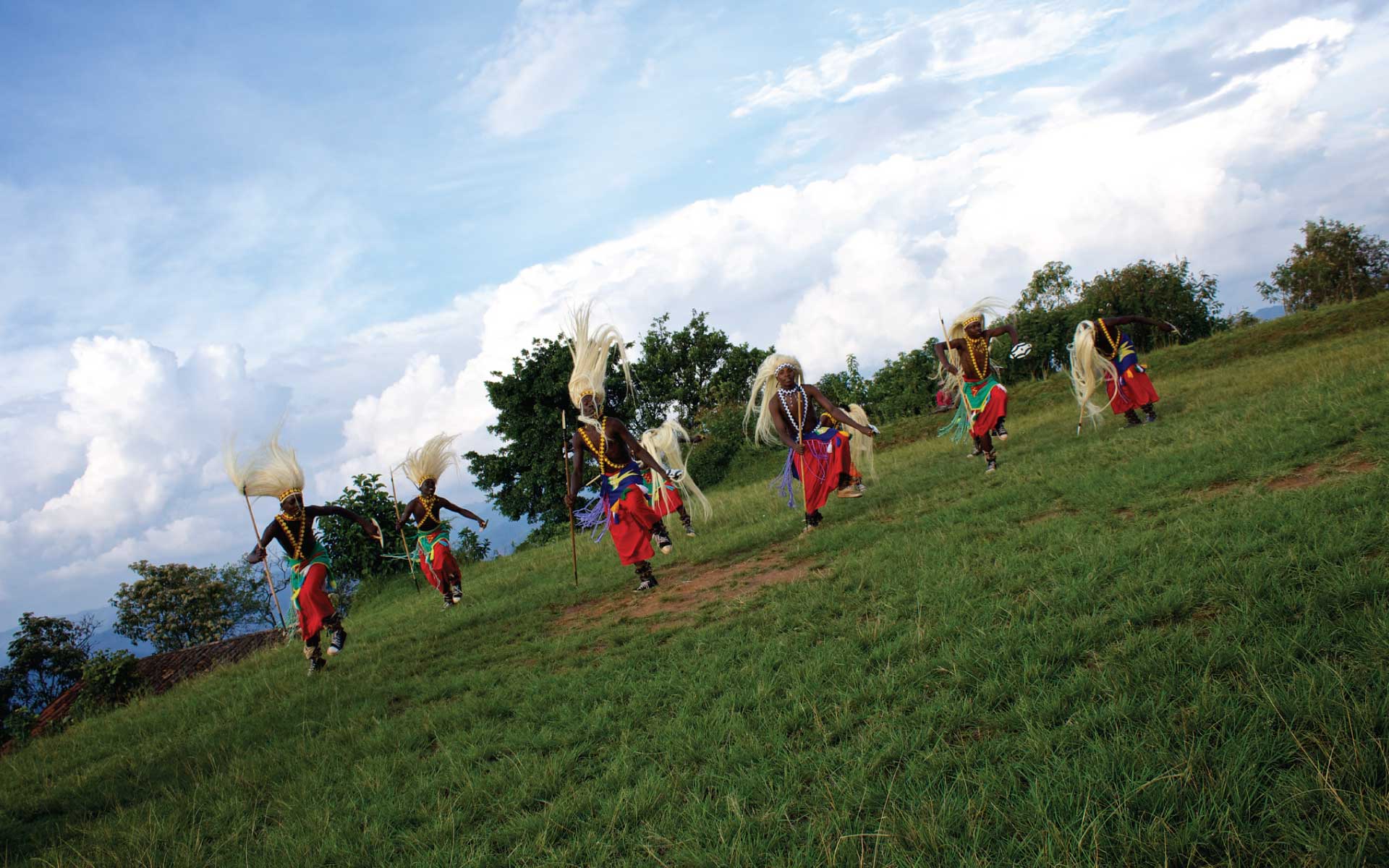 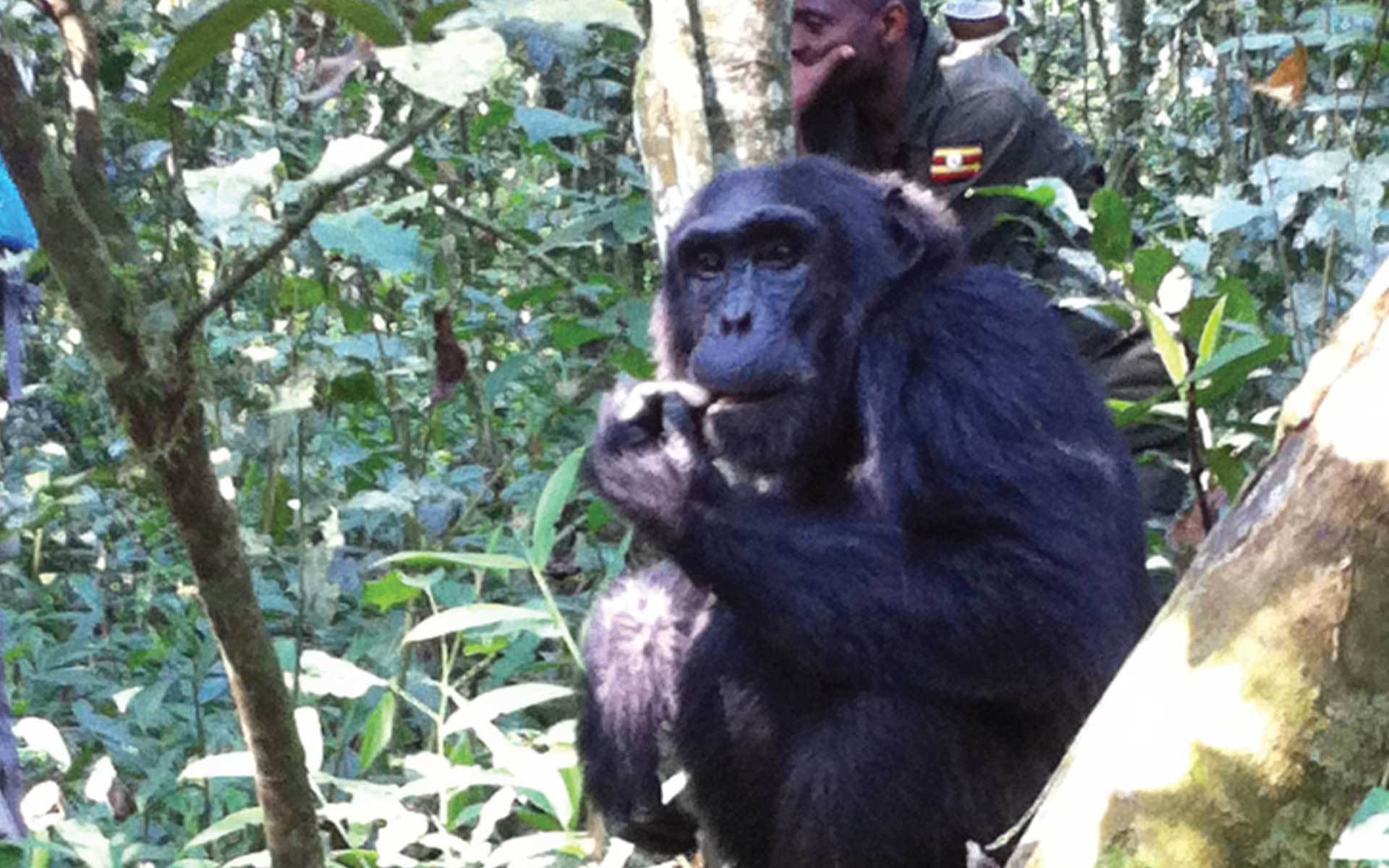 Uganda is not brilliantly accessible, so we recommend flying from Entebbe to Kisoro (1.5hrs) to reach Bwindi National Park.

Entebbe is not a popular hub, so most international flights will have to fly via a major city such as Johannesburg, Nairobi, Addis etc. 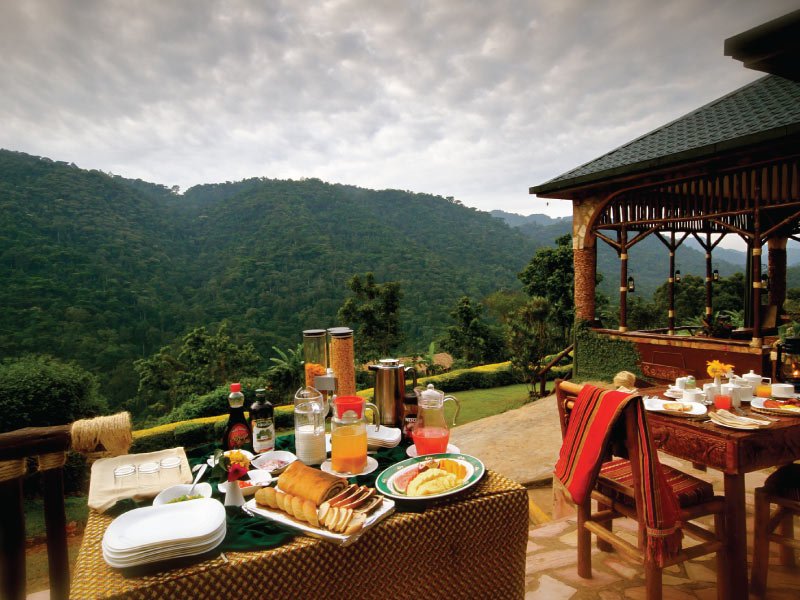 Clouds Mountain lodge has one of the most amazing settings of any of the lodges we work with, and this is absolutely the place to stay in Uganda for the gorillas. Clouds offers each couple their own volcanic stone cottage warmed with its own fireplace, and each cottage features the work of one of Uganda’s most respected artists.  Located high up in the hills, the lodge commands views over the entire region and is a magical little place due to its unpretentious charm and links with the local community. However, please note that it’s a hard walk back up to Clouds after a long day’s gorilla trekking! It’s well worth the effort however.

Sanctuary Gorilla Forest Camp comes a close second, and is the only accommodation located within the UNESCO World Heritage Site Bwindi Impenetrable National Park (home to just over half the world’s last surviving population of mountain gorillas). The 8 large en suite ‘tents’ with a bathtub looking out onto the forest are ideal after a day searching for gorillas in the forest. The camp has a bar and dining cottage overlooking the rainforest. Guests can sit around the campfire at night whilst enjoying the crystal clear mountain sky.